Not many people notice but Loki, the lord of wildfire, renowned trickster and master shape-shifter is intimately connected to the mysteries of Berkano.  Berkano is all about growth, femininity, cleansing, fertility and Spring; qualities which don’t immediately lend themselves to an association with Loki.  However, the Old Icelandic rune poem tells us that:

Birch has the greenest leaves of any shrub; Loki was fortunate in his deceit.

Not many rune poems mention a god by name so we have to take this seriously if we are dedicated to understanding the authentic mysteries of the rune.

Loki is a mum

Who would have thought it?  While Loki is often vilely rude to the goddesses he encounters in the Eddas, he is equally rude to the gods so we can’t assume he is anti-women.  Indeed, like Odin, Loki is quite comfortable seeking his knowledge and skills from whomever has the best ones – even if the are girls.  For a seemingly machismo, warrior-like pantheon there is a significant amount of blending between what we now view as stereotypical gender roles: Freyja and Skadi are both fierce goddesses, Gefjon is handy with a plough, Urd and Skuld willingly wade into battle along with countless Valkyries.  Equally, figures like Odin and Loki transgress quite freely (if not without criticism) into the female mysteries and we also know that figures such as Tyr may stem from older, hermaphrodite deities.  Indeed, even Thor himself dresses up as a bride in one particularly excellent tale.

Loki takes his exploration of the female mysteries to the very extreme when he shape shifts to become a mare (a female horse).  In this form he gives birth to the horse Sleipnir, a magical horse with eight legs able to travel between the worlds.  Whereas some of Loki’s other children are considered as aberrations by the gods of Asgard, Sleipnir is never labelled as such. Sleipnir becomes Odin’s companion and the image of the one-eyed God riding on his unusual steed is well known.  Not only does Loki’s crossing of the gender boundaries produce a child capable of crossing the boundaries between the worlds; but Sleipnir might be interpreted as a ‘weaver’ in that its eight legs are reminiscent of a spider.  Weaving was traditionally a female mystery and Sleipnir has therefore been gifted something very previous by its all male parentage. 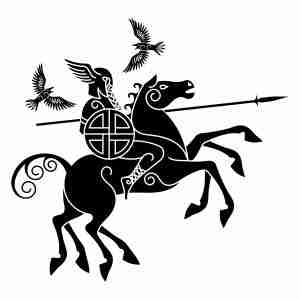 Loki’s transformation into a mare was largely done for self protection and might be viewed as a cowardly act; I can quite easily imagine him saying ‘You wouldn’t hit a woman would you?’ while batting preposterously long horsey-lashes.  It is the birth of Sleipnir that changes an impressive trick into something much more awe-inspiring; Loki takes on not just the semblance of the mare but also her ability to bring new life into the world.

My own personal work with Loki suggests that he has fully mastered the seductive arts more traditionally ascribed to female deities of love and sensuality (and you should be aware of this when you work with him as he will use every charm going to get what he wants).  He is also unerringly drawn to finding the weaknesses, prejudices and vulnerabilities of the world and ripping them open.  Why should women keep all the fun to themselves?  Why should men fear to explore their feminine sides?  While much of what he does reflects his trickster nature, the trickster is also able to expose the foolishness of the world and its rulers.

It is quite possible that the reference in the rune poem to Loki being fortunate in his deceit relates to a long forgotten myth in which Loki hides within the abundant leaves of the birch tree.  We might see an echo of the cowardly behaviour of the trickster god turning into a mare here; in this forgotten legend he hides within the leaves of the lithe and feminine birch tree, patron tree of young girls.  But we might also look more deeply at what this means about Loki. Why does the tree protect him? Why does the female form protect him?  The mysteries of the Berkano rune are tied up not just with the abundance of the green leaves, but also with the protection they afford.  Berkano is the apron of the protective mother, the womb in which the baby grows strong, the embrace of the earth where we lay our dead.  It has a veiling quality, a hidden aspect: within its buxom triangular form it guards the hidden spaces of women and young children and keeps them safe.

For me Loki is the trickster personified, nothing is sacred to him and by that I mean nothing is forbidden to him, there is no transgression because he is the crosser of boundaries and the explorer of unrecognised, unacknowledged things.  Anyone who has been in a birthing room will know that there is a time to set aside politeness and just get on with it, never mind about embarrassment or offending others by swearing as we get right down into our animal nature.  Loki is rude about everything and everyone, but he is never dismissive, he knows the safety the Berkano rune affords and feels no shame at claiming its protection and its power for himself.  Because of this he is a sage and a survivor – Odin didn’t name him brother for nothing (btw that makes Odin his own horse’s uncle – just saying).

For those of you interested in northern soul lore there is also a really interesting connection here between Berkano, Loki and the hyde.  In other spiritual traditions the hyde might be referred to as the astral self; but it is more than that.  Imagine a person you know really well – hold them in your mind.  That image is their hyde.  To my great shame I didn’t notice for literally weeks when my dad got rid of his moustache.  It took a relative stranger to point it out to me.  The reason for this is that I was used to looking at him and seeing his hyde, a part of his being which is made both my him, and those around him.  Now, some people are masters of forming (some might say manipulating) their hyde.  It becomes part of their glamour which is most commonly used to project success and confidence.  In a more positive light it is undoubtedly true that following powerful soul level work a person can literally emerge looking glowing and radiant despite few discernible physical differences.  The hyde can also be used to ‘dim down’ ones true nature in order to  hide in plain sight – think Kevin Spacey in The Usual Suspects.

Now Loki is a shape shifter but, for us humans the art of shape shifting may not relate to the physical body (the lyke) but rather to the hyde.  Berkano is undoubtedly an important key to this art.